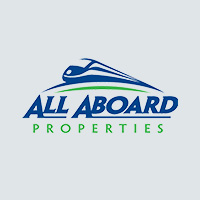 Clark Properties of Port Orange, FL has been renamed All Aboard Properties. New signage with an updated train logo and a new website was launched in December of 2013 at our thirteen All Aboard Storage locations and business parks, the Sunshine Park Mall in South Daytona, Masonova Commercial Plaza in Daytona Beach, the Clark Office Building in Port Orange, and Maplewood and Treasure Isle Estates manufactured home communities in Port Orange.

Time for a New Look

The decision to change the name and logo came about when the president and owner, Andy Clark, decided that it was time for a change. A new corporate identity was needed for the local family business that had been started by his father, the late Douglas J. Clark, more than 50 years ago. He enlisted the help of Shok Idea Group for a new corporate identity, which included a new name and logo design, branding, signage and a new website.

“The name All Aboard Properties ties into All Aboard Storage so that customers can immediately see the connection between the storage company and it’s parent company,” says Scott Disbennett, president of Shok Idea Group in New Smyrna Beach, FL. “The logos were designed to use the distinctive train that All Aboard Storage customers have known and recognized for many years, but with a new color palette and updated look,” says Disbennett. “If you looked at the previous logo for Clark Properties you would have no idea that this company was tied to All Aboard Storage.”

Below is a look at the old and new logo designs:

All Aboard Storage’s logo has also been redesigned to use the new color palette and have an updated look for their classic train. The train symbol was originally incorporated into the company brand for the Clark family’s interest in trains. The storage facilities were named “depots” and the Clark family even purchased a historic refurbished train cart that sits on their wedding property. At one time, a mini-train could be seen circling the family property along railroad tracks that would weave in between the beautifully landscaped areas of their riverfront home and neighboring wedding property. It was important that the train symbol remain part of the All Aboard Storage logo, which is now also part of the All Aboard Properties brand mark.

All Aboard Properties has begun to rollout the new look for 2014, replacing old signage, branded materials, employee uniforms and marketing collateral.